it's only tea over my dads house and I'm used to everything he cooks being burn't or dried up so waiting a few minutes longer while I write in my blog shouldn't make much difference. I often visit my dad for tea even though he only knows how to cook two things, roast dinners and fry ups! Then after tea I sit down with him watch endless soaps all night. I myself hate all soaps but he loves them all and watches them every night. I normally take a magazine to read or my net-book as I just can't watch them. It seems strange to visit my dad and spend half the time reading or on the computer(not the net though as he has something called dial up I believe whatever that is!!) but that's what happens as we don't have much to talk about or in common so we just settle for spending time together and doing different things.

This week has been very quiet for me work wise which is a surprise as I've new ads out again. I did a double dom session yesterday though which was great fun and I could have seen at least 2 people today had I not overslept that is!! In the end I got up and decided to tidy my house instead and even cleaned the fish tank out for the first time in months. I'm surprised the fish is still alive swimming around in that dirty water. He seems happy now though I think as his fin is up again(this is how you tell so I've been told)and the cat is happy she can now see into the tank again. I only have one fish as he's always killed any others I've added so I've not just accepted he wants the tank to himself and it's his fault if he gets lonely.

Saturday and Sunday was taken up mainly by two photo shoots. One for Repartee in Reading and the other in Bristol and this was just some pics for a mistresses dungeon. I don't have any of the photos so can't show off any samples but I think we got some good results for both. The Repartee shoot involved horses and they looked good even if I didn't. Funny I'm not good with horses but I should be as my mother lived and breathed horses. To me they're just animals that you sometimes have to avoid on the roads and I'm not sure why they're even on the roads in the first place when there's 100's of fields they can go in. They don't even need an MOT!

OK I think my diner should be even more burnt by now so better go.
Posted by Nina_Jay at 09:52 No comments:

It was 10 days ago I last wrote on my blog and I thought it was about 5! Time seems to be going by so quickly at the moment.

So what have been up to in the last 10 days you're all asking me right?

To be honest I'm not sure it's all a bit of a blur  but I have had a very busy week as far as work goes and today apart from the weekend is the first day I've not had a client for a while. It was all down to an ad I placed in my local trade it which wasn't cheap but proved worth spending the money on. I had a few good sessions too that I actually quite enjoyed doing which is good as often I don't.

Before I go any further it was pointed out that recent blog entries have had a lot of spelling mistakes and although I admit to being a rubbish speller this was more down to the batteries in my keyboard than my poor spelling. Even I get the first letter in most words correct normally. Anyway new batteries now which is loads better so all mistakes this time are down to me again.

On Saturday I went to Glastonbury carnival as the North Petherton one had been cancelled the previous week as I mentioned in my last blog entry. It wasn't as good but I only really go to look at any sexy costumes the women are wearing on the floats and yes there was one or two nice ones again this year. If you want to know where I get ideas for some of my strange outfits this is one place. Second only to my love of the women in pop videos wearing stuff never seen on the streets.Although I wish some women would dress this way in the real world but understand why they don't.

Sunday I went to SWAMP which was OK. It's kind of like a pub but with a few people being spanked in the background and a few more dressed in fetish-wear but it's always very pleasant there. I went with my friend Lord Q as it was his birthday and we took cake which I was careful not to get on my purple leotard but not careful enough it seems!  So as I had chocolate on me there was only one thing to do take my clothes off and change outfits. Sadly not having another outfit we made a dress from pallet wrap instead. Kind of like in the attached pics but my arms were this time outside of the wrap and there was no rope round my neck either. It looked pretty good too but I was disappointed no one noticed I was in a pallet wrap dress!. 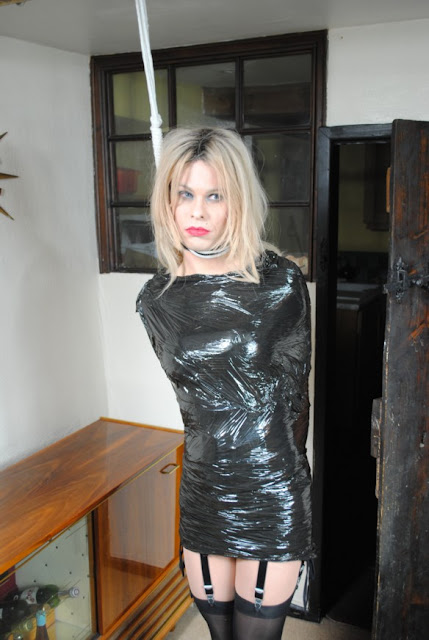 Sadly it can only be worn once as we had to cut it off me at the end of the night but don't worry we have plenty more wrap to make more dresses in the future.
Posted by Nina_Jay at 11:10 No comments:

The only real reason for calling this post fireworks is the obvious fact that it's bonfire night tonight and I was going to a carnival in Somerset followed no doubt by a firework display but the carnival has now been cancelled so it looks like a quiet night at home with a DVD instead. The reason the carnival has been cancelled will be known only too well by anyone living in the area. As last night there was a horrific car crash on the M5 and several people lost their lives and the motorway still remains shut today while the carnage is cleared up. This is very near where the carnival takes place both out of respect for all those who died and the fact the main road to the event is shut it's been cancelled. The junction where the crash happened is the one I get on and off the motorway every week and in fact I was driving home last night at roughly the same time but this time not down the M5 but I do feel for all those who died and their families.


Other than  avoiding motorway pile ups what have I been doing lately you ask.


I'll go back to over a week ago to start with and I had yet another photo session for http;//www.smorgasborg.com
which was interesting as always apart from the bit where we tried to do some pics hanging upside down on a door which didn't work and just seemed like an accident waiting to happen to me. Luckily we gave up before one did though.


The day after which was last Friday I was a model in the second Bristol trannie fashion show(check out the photos)its a private show just to teach trannies what to wear as many not being brought up wearing female clothes have no idea. Unlike me of course. Yes I do know how to dress before you say anything!! 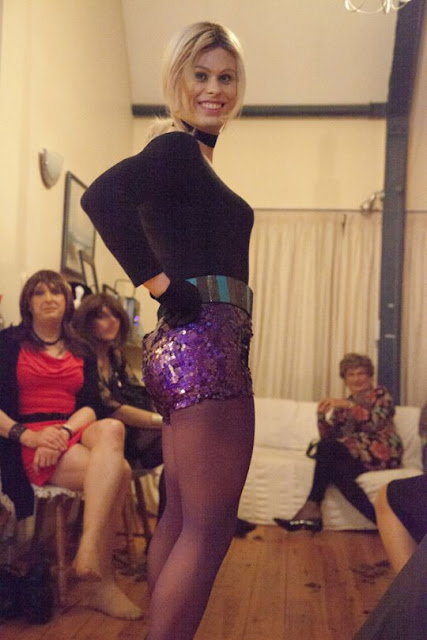 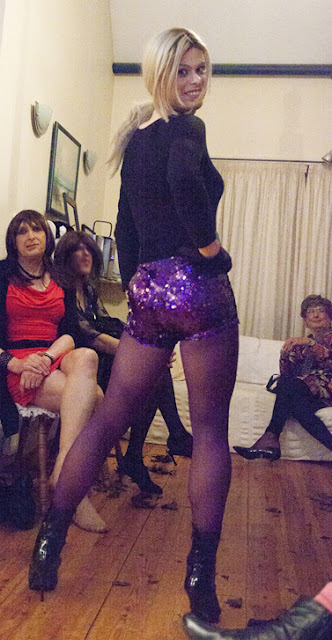 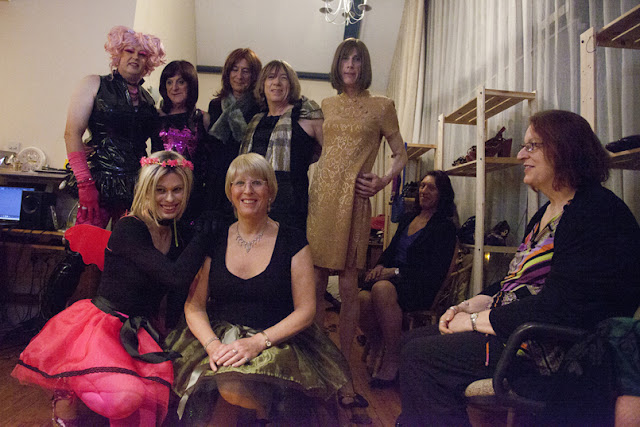 I didn't feel at all well but thanks to some drugs the lady hosting it gave me I made it through and even enjoyed showing off in front of a bunch of trannies who only really came for the food!!


The following day it was off to Birmingham with my friend Lord Q(yes that is really his name honest)for a night at a new spanking event called "spank and play" not to be confused with "wank and pay" which is a different thing altogether. Again I had a great night and even got a private play with a sexy real girl only spoilt by her male friend being involved and constantly waving his cock in my face saying things like. "Bet you'll like to suck this wouldn't you?" To which I responded "no I really wouldn't" but it was still a fun session and the event worth going to again I think.


So two nights and two event I'd enjoyed roll on the next day and my third event MDS I thought.


Things didn't start well with one of my friends I had to collect along the way running half hour late but in the end he got in the car moaning as normal but I don't mind this as his moaning always comes across as amusing to me. He brought a friend along for the ride who was mean't to be filming everything but filmed nothing on the night. Then I picked up my friend Kat(dressed as cat-woman) before travelling to meet Lord Q where we swapped cars and all piled into his. He set the sat nav for the venue only for me to say I knew the way so he didn't need it. The venue was only a 20 minute drive but an hour after leaving Lord Q's we still hadn't got there.Turns out I didn't know where to go after-all!!


My favourite memory of the night was me and my 4 friends walking back to the car where I walked slightly ahead thinking I was the only one looking normal. I was followed my a man in a punkin zentai suit and top hat and trannie with no wig in a catsuit and guy in a long coat rattling as he was covered in chains and handcuffs who also had glasses made from tea strainers and lastly a guy in black carrying kind of wooden stocks. It was only when I sat down  in the car that I realised sticking out from under my long coat was the devils tail I'd forgotten to remove when I took the rest of my sexy devil costume off! BTW in case yo're wondering it was Halloween.